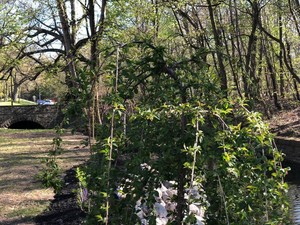 I kindly ask you to support installation of Yuri Gagarin's bust in the Russian Cultural Garden.

It's a wonderful story that started last year when we received a letter from Mr. Bairamov, the leader and founder of the International Charity Public Fund "Dialogue of Cultures - United World" who asked us to kindly accept a bust of Yuri Gagarin that was created by sculptor Aleksey Leonov (not a cosmonaut). Bust should be installed in our Garden.

That was a big surprise and a big honor to be selected for installation of the bust. There have been over 500 International cultural projects performed by this Fund since 2005, and the most prominent was giving away the bust of Gagarin to the most significant institutions and organizations in 35 countries. Of course, we graciously accepted a gift and promised to install it in our Garden within a year, which means that we needed to create a design, get it approved, manufacture a pedestal, get all the necessary permits from the City of Cleveland, deliver a pedestal and a bust to the Garden, build a proper foundation, install the pedestal and assemble a statue.

The whole cost of the project is $16,000, including manufacturing, delivery and installation of the granite pedestal 5'6" tall with engraved name of Yuri Gagarin, date of first flight in Space, Gagarin's quote and the name of the Dialogue of Cultures - United World Fund as a donor of the bust.

Also, on the back of the pedestal we are going to engrave the names of all the people or organizations who donated $1,000+ to this project. If you want your name, or name of your loved ones, or in memory of your loved ones to be engraved on the Gagarin's pedestal, please join the other donors and donate $1,000 or more. If you just want to support, please give any amount. Each dollar counts and is greatly appreciated.

Project will be completed by August 24th when we will have a big Gagarin Gala at the Great Lakes Science Center. Sale of the tickets just started. Sculpture will be unveiled during One World Day on Sunday, August 25th.

Thank you all for your support!

Summer 2018 - Adopt-a-name fundraising campaign. We are raising money for the Walk of Fame of the Russian Cultural Garden - pathways with names of the Russian Cultural Heros engraved on the bricks and pavers. The Garden will invest in the Greatest Of All Times Russians Alley and the Noble Prize Winners Alley - a total of about 70 names will be included at this point (the list will never be final). A person can adopt and sponsor, say, a paver with Leo Tolstoy's name for $150. Each paver will display the name of the artist, his/her years of life and the area of achievement. Sponsor will receive a framed certificate and, for additional $10, a personal copy of the paver brick. If several people want to sponsor a specific artist, all of them will receive a certificate. Any name can be sponsored by a group of people.

This campaign has started during the Cleveland Russian Festival on July 27 and had been going very well. By this time we have a sample paver and a certificate, so people may see where their money will go. We are ordering the bricks right now in order to receive them in a reasonable time. They may be installed before the end of August. Mikhail Khoretonenko, who is managing the list of names, will compile the priority draft and we will order those pavers from the best engraving company.

Your contribution will make an impact, whether you donate $5 or $500. Every little bit counts.

Thank you very much for your support.

Spring 2018 - Russian Cultural Garden's activists, supporters and volunteers started beautification of the Garden as a part of Phase 1 of the developing of our site. After post-Winter cleaning up of the site  during an Earth Day's volunteer party, we did a great job building a flower bed along the bank of Doan Brook and filling it in with beautiful trees, shrubs and flowers. Willow trees, cherry trees, rhododendrons, and multiple perennials were planted, thanks to many volunteers who donated their time and funds to make it happen.

Wednesday, January 13, 2016 - The Russian Cultural Garden non-profit organization is proud of starting few significant cultural events in Cleveland: the Annual Grand Piano concerts in the Russian Garden; Maslenitsa; Youth Festival of Arts; History of Music Club. What we needed was an active Committe of the dedicated, talented people willing to take a leadership role in organizing all the events in the Russian Cultural Garden.

During the first general meeting of the Russian Cultural Garden in January of 2016, the Special Events Committee has been formed. Thank you, Ksenija Turovskaya, Antonina Pakholkova, Katya Turichenko, and Milena Georgiadi for taking responsibilities over organizing the special events in and on behalf of the Russian Cultural Garden! We believe in your talent, enthusiasm and professional skills and hope to see many more exciting events under your leadership!

HISTORY of the Russian Cultural Garden

Thanks to the hard work and dedication to our volunteers, the  Russian Cultural Gardens team has reached our goal for 2014. With our tireless efforts and great help from the community, we have achieved a better awareness of our project and gained a bigger support from our community.

$10,200 raised in 2014 by individual donors and $4,500 donated by corporate sponsors to support the Grand Piano in the Russian Garden event. Much more money needed to build the Garden but it's a good start for launching Phase 1 in 2015.

The Russian Cultural Gardens participated in many significant activities in Cleveland in 2014.

September 13-14, 2014 - One World Day and Festival in the Cultural Gardens. Russian Garden takes part in the parade of flag and hosts the children's program "Games of our childhood"

This concert started the annual events "Grand Piano in the Russian Garden", which, we hope, will become another lovely tradition, same as Opera in the Italian Garden or Liszt Festival in the Hungarian Garden. Inaugural year concert's theme was Music and Musicians of the Cultural Gardens of Cleveland. There are thirteen busts of the famous musicians in different Gardens at Rockefeller Park, and the special Music Plaza in Hebrew Garden.

Pieces by composers, honored in the Cultural Gardens of Cleveland, such as Chopin (Polish Garden) and Liszt (Hungarian Garden) were performed by brilliant Cleveland musicians (CIM, class of Sergey Babayan) Dmitry Tyurin and Nara Avetisyan. Celebrity pianist from Russia - Second Prize and Russian Prize winner of 2013 Cleveland International Piano competition Arseny Tarasevich-Nikolaev delivered a brilliant performance of Musical Moments by Rachmaninoff who will be honored in the future Russian Cultural Garden

March 1, 2014 - Art show and silent auction of the painting by Nataly Romanovsky at Opus Gallery.

Big thanks to all our wonderful supporters, volunteers, donors, to our Board members and Committee members for all the hard work and your heartly dedication to the Cultural Gardens!