Upcoming and past events 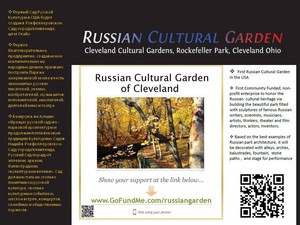 With the support of Mayor Frank Jackson along with the Cleveland Public Libraries, Global Cleveland, Council of International Programs USA (CIPUSA), and Cleveland-Volgograd Sister Cities (GCVOA), members of the Russian Community in Northeast Ohio were invited to come in person to the main branch of the Cleveland Public Library or join online for a “live streaming’ event with our Sister City, Volgograd, Russia. Our partnering with Volgograd began in 1990 and we have exchanged delegations over almost 30 years of our relationship. This year marks our hosting of the exhibit “From Stalingrad to Prague” sent to us by our friends in Volgograd.
• SEND GREETINGS TO VOLGOGRAD
• LEARN ABOUT CLEVELAND-VOLGOGRAD SISTER CITIES
• HEAR HISTORICAL HIGHLIGHTS ABOUT THE
RUSSIAN COMMUNITY IN CLEVELAND
• LEARN ABOUT UPCOMING EVENTS IN THE
RUSSIAN CULTURAL GARDEN
• ENJOY TRADITIONAL RUSSIAN FOLKS SONGS BY
THE CUYAHOGA COSSACKS
As a special salute to area residents of Russian birth and heritage, the flag of the Russian Federation will fly over Cleveland City Hall on this day, Wednesday the 5th of May.

We were fortunate to host one of the most colorful events of the year right before the COVID-19 lockdown and cancellation of all the public events.

Gagarin Gala, vintage style party, celebration of Yuri Gagarin, First Human is Space, whose statue was installed in the Russian Cultural Garden in Rockefeller Park in Cleveland and dedicated during One World Day on Sunday, August 25, 2019.

On 12 April 1961, cosmonaut Yuri Gagarin launched on Vostok to become the first person to orbit the Earth, the first human in space. His flight lasted for 1 hour and 48 minutes.

2:00 - Unveiling of the Gagarin's statue in the Russian Garden

Inuendo - Namyok Rock group will play in the Russian Garden

Official ceremony and party. Presentation of the Walk of Fame of the Russian Cultural Garden.

Here is a schedule of the entertainment program in the Russian Cultural Garden during One World Day:

2:30-3:30
Walk of Fame trivia and Family Time
Children’s activities at the Circle of Fame and throughout the Garden

Sunday, August 28, 2016 from 11 am till 7 pm - One World Day in the Centennial year of the Cleveland Cultural Gardens and Apple Festival along with the Youth Music and Arts Festival in the Russian Cultural Garden.

Thursday, June 23, 2016  - Groundbreaking ceremony at the Russian Cultural garden was a big success. Founders of the Russian Cultural Gardens non-profit organization Svetlana Stolyarova and Boris Vinogradsky presented the project and welcomed the guests and volunteers. About hundred people came to share the joy of the start of Phase 1 construction in the Russian Garden. VP of the Cleveland Cultural Gardens Federation Paul Burik welcomed the 30th Garden in the family of the cultural gardens that celebrate the 100th anniversary in 2016. Councilman Jeff Johnson expressed a big support to the Russian Cultural Garden from the City Hall and the Glenwill community. Many guests were actually breaking the ground and planted first flowers. Russian male chorus performed joyful Russian songs. Young Polina Kornyushenko delivered an amazing singing performance.

Sunday, August 23 - 11:00am - 8:30 pm. One World Day in the Cultural Gardens of Cleveland #owd2015. The annual One World Day, the official event hosted by the Cleveland Cultural Gardens Federation for the Gardens, was the highlight of the busy calendar of summer events in the Gardens and the one occasion that all the Gardens get together to celebrate as one. Events included a Parade of Flags, a naturalization ceremony, cultural performances, entertainment, gardens exhibitors, authentic diverse ethnic food and more.

Russian Garden hosted the Second Annual Grand Piano in the Russian Garden event during One World Day. It was the whole day event, starting from the Children's Music Festival that brought together young talents, the students of the local piano teachers and Music schools.

Highlight of the day was the celebrity performance by brilliant Stanislav Khristenko , the First Prize winner of the 2013 CIPC. Another featured artist was Dmitry Tyurin, young, highly talented CIM student of Sergey Babayan.

After hours,  a jazz program started - just imagine sounds of jazz , perfect warm August evening, beautiful Cultural Gardens  - that was unforgettable! It was followed by Open Mic hour that was a very warm and touching conclusion of the festivities.

September 13-14, 2014 - One World Day and Festival in the Cultural Gardens. Russian Garden takes part in the parade of flag and hosts the children's program "Games of our childhood"

This concert started the annual events "Grand Piano in the Russian Garden", which, we hope, will become another lovely tradition, same as Opera in the Italian Garden or Liszt Festival in the Hungarian Garden. Inaugural year concert's theme was Music and Musicians of the Cultural Gardens of Cleveland. There are thirteen busts of the famous musicians in different Gardens at Rockefeller Park, and the special Music Plaza in Hebrew Garden.

Pieces by composers, honored in the Cultural Gardens of Cleveland, such as Chopin (Polish Garden) and Liszt (Hungarian Garden) were performed by brilliant Cleveland musicians (CIM, class of Sergey Babayan) Dmitry Tyurin and Nara Avetisyan. Celebrity pianist from Russia - Second Prize and Russian Prize winner of 2013 Cleveland International Piano competition Arseny Tarasevich-Nikolaev delivered a brilliant performance of Musical Moments by Rachmaninoff who will be honored in the future Russian Cultural Garden

March 1, 2014 - Art show and silent auction of the painting by Nataly Romanovsky at Opus Gallery.

October 13, 2013 - International Community Day in the Cleveland Museum of Art

We are very proud to be one of fifty two International community groups who made the second International Community Day in the Cleveland Museum of Art such a success.

Here is the words of gratitude from Marjorie Williams
Sr. Director of Endowment Development
Department of Development
The Cleveland Museum of Art:

The Second Annual International Cleveland Community Day was a grand success last Sunday thanks to you! 3400 people attended the event that demonstrated the rich diversity of Cleveland through expressions of dynamic performance and thoughtful presentations of the cultural materials. From all of us at the museum, please accept our profound gratitude for sharing your heritage with the museum. Fifty-two community groups and organizations participated in the day‘s event. Our patrons throughout the day remarked about the dynamic energy that filled the museum. Thank you for contributing to this day and to our community everyday throughout the year.

We look forward to working with you again next year!

Young Russian girls performed beautiful American music at our One World Festival event. I am thrilled to present the beautiful program of the Celebrity School of Music:

- "Once upon a December" from Anastasia
- "Cruella Deville" from 101 Dalmatians

Guests and visitors of the Russian Cultural Garden truly enjoyed this beautiful singing!

After the ceremony of the Cultural Gardens of Cleveland Information Kiosk dedication  Russian speaking Cultural Gardens' tour was guided by Victoria Kabo, librarian from the Foreign Literature Departmednt of the  Cleveland Public Library. Thank you, Victoria for a wonderful story of the older Gardens. We had a chance to visit and learn about Italian, Greece, German, Lithuanian, Ukrainian and Hebrew Gardens. Very educational and simply beautiful!

We hope that with your support and our mutual efforts we'll raise the funds and do the Phase I of the Garden in the foreseeable future.

It will take place in MEMORIAL NOTTINGHAM BRANCH located at 17109 Lake Shore Blvd.

The Russian Cultural Garden's conceptual design has been presented to Cleveland Landmarks Committe. It was unanimously approved.

Few more steps, and the Russian garden will get the designation by the City.

The Russian Cultural Gardens Conceptual design created by James McKnight from McKnight and Associates Landscape Architects Firm was presented to the friends of the Russian Garden.